The Religion of Wall Street 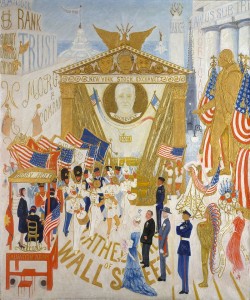 Is economics really all that different from our current view of religion? Think about the rhetoric we use when discussing economics and religion.

“Capitalism is the saving grace to the world.” “All salvation comes through the Catholic Church.”

“The USSR was a corrupt form of communism and shouldn’t be how we judge it.” “ISIS is Islam gone wrong and we can’t consider them truly Muslim.”

“How about distributism?!” “Oh yeah, we forgot Jediism was a thing.”

The conflicts in economy are just as pronounced as in the religious world. People are willing to stand and die by their preferred system.People use economics the same way they use religion. We look to the ideal of our preferred model of economics and say, “if only everybody agreed with me, the world would be fixed.” Capitalism and communism are how we console ourselves when we look at how terrible our world is coming. We make exclusive commitments to these systems. In fact, they are often tied up in our “actual religions.” Look at Max Weber and his ideas of the Protestant work ethic. In his book The Protestant Ethic and the Spirit of Capitalism, Weber argues that it is only in Protestant countries that capitalism can thrive. He uses Calvinism specifically to argue that, though they reject the Catholic idea of faith and works, they say that their predestination will be seen in the way they live their lives. Capitalism preaches that your success in life can be seen by how hard you’ve worked and where you’ve made it. If you make it to the top of the food chain, it is through a personal commitment to hard work. Though Weber’s work is now beginning to be questioned more, especially due to the advent of capitalism in India, it still can be easily seen in the way more traditionally recognized (Western) religions operate.

Americans and much of the West have a very binary view of economy. It is either capitalism or communism. And as is natural in seemingly binary systems, people take sides and the other side is automatically wrong. This binary view is (at least to an extent) a product of the Cold War. The USA versus the USSR. Capitalism versus communism. During this time, American pride skyrocketed and everything about America had to be better than the Russians. Capitalism must show itself to be superior to communism. This thought process has continued into the 21st Century, except now there are those who, maybe rightfully so, have become disenfranchised with capitalism. Due to this binary view, communism appears to be the only other option.

With the current state of the economy not necessarily being an all-time high, Americans are quick to believe that if everybody were to just fall in line with the “correct” economic system, our country would be “saved.” So we follow our leader who represents the ideals of our system best. On one side we look to people like Ted Cruz who tells us that we have fallen into crony capitalism and instead need to get back to the fundamentals.  But the other has Bernie Sanders telling us that obviously capitalism has failed and we need to hunker down on the rich who are keeping the poor poor. We have our “savior” who will lead us down a path towards a perfect world and so we take to the streets (or the Internet) and preach in his name that America can be great again if only we take to these teachings. We profess our creeds, knowing that we have the “Truth.”

Religion doesn’t just appear in the pews. Religion and religious thought is everywhere. Economics is just one among many places where we see this comparison. So as we come to the Church of Wall Street and thank our respective saviors Adam Smith and Karl Marx and profess our creeds with hand over heart, remember that is never just about the money. Religion comes in all forms.