On Belief and Beyoncé 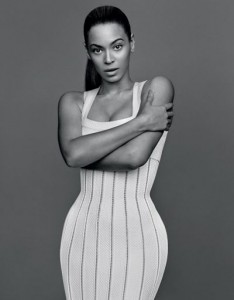 In their most recent April edition, Elle magazine published a rare gem: a full interview with Beyoncé. While she is never far from sight, some have noted that Beyoncé has retreated from the public eye in the past few years, declining interviews in favor of more carefully cultivated portrait’s of the artist’s interior life. When she released the video single for ‘Formation’ earlier this year–proudly parading her personal roots and featuring her baby daughter–many fans were jazzed with what appeared to be a peek into the privatized, “authentic” blackness of Beyoncé. But if the song seems to revolve around embracing authentic individual identity, why, then, do many Americans find Beyoncé’s pro-black anthem a political and public threat? What is it about this new iteration of Beyoncé that the public finds so jarring, when this is far from the first time she has called for critical engagement with the way our nation talks about gender, race, and police brutality?

I believe that this perceived public threat stems from the dialogue Beyoncé’s ‘Formation’ release generates about the public and private self. What does it mean for the music video to be unlisted on YouTube, accessible only through her private site, and yet performed on the SuperBowl stage? What do we make of the most personalized, individualized Beyoncé yet calling for community formation, for a reimagined nation? And we must also ask…where is this call coming from? In the ‘Formation’ video, the call is coming from inside the house. We see shot after shot of private spaces, from interior scenes of church congregations, living rooms, and community centers to corner liquor marts, front porches, and neighborhood streets. What we don’t see are scenes of popular notions of public power: Beyoncé kicking her feet up in the Oval Office, donning a police uniform, leading a public rally. And yet, there is apparently something threatening about this very privatization at the core of a larger public appeal.

Perhaps it has to do with what Russell McCutcheon calls a lengthy history of “domesticating dissent” in America by privatizing the beliefs of marginal groups. The American emphasis on individuality, he argues, coupled with the promise of “freedom of belief”, is a powerful rhetorical tool for maintaining social order and dominion over marginalized communities. By conceding safe spaces (like churches, homes, and the individual imagination) where individuals can host political beliefs without bringing them into public practice, the state is able to privatize dissent and thereby protect the American Way of Life from ideological threats.
However, as McCutcheon notes, dominant groups in America have historically not been asked to keep their beliefs at home. Rather, when backed with economic, political and social structural support, the beliefs of privileged communities become normative moral absolutes, or just the obvious tenets one must abide by in order to achieve the American Dream. Those who defend the Dream often forget its inaccessibility to non-dominant groups, interpreting an inability to appropriate the “universal precept” under current social conditions as political and moral dissent (Butler, Giving an Account of Oneself). When this American Way to Be is critiqued, or reimagined, or rejected entirely, as Beyoncé has done with ‘Formation’, there is a panic that wells up among those whose privileged beliefs form the fabric of the Dream. In the words of Stanley Fish, for members of marginalized communities “the only good belief is the belief you can wear lightly and shrug off upon entering the public sphere.” (Domestication of Dissent). However, as many outfit and hairstyle changes as Beyoncé undergoes in ‘Formation’, she does not appear to be folding her beliefs back into the drawer any time soon.