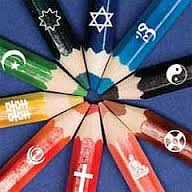 With the upcoming election there have been many debates and discussions involving religion and how it factors in to the equation. This got me thinking, how does a candidate approach this topic or situation considering the frequently changing landscape of American Religion. Hearing some of their answers to questions regarding this topic, or topics similar to it, made me think about the rising number of people who claim to be just simply spiritual not religious. So many Americans today, especially young Americans, are claiming no religion and no belief in God. Whether or not it’s just the cool thing to do or these people actually believe what they’re saying is probably specific to the case. None the less, there has been a steady trend of declining belief in God or a supernatural power of any sort amongst American citizens in the last half century.