In theory, this app really seems like the ideal place for young adults to express themselves anonymously, while creating open dialogues with other members of their community. In some cases, this is exactly what it’s used for. Without the pressure of having your “reputation” on the line, people are able to construct a virtual identity. But with anonymity comes an interesting result— there is no social accountability.

This means people can say whatever they want, however they want. Some of the results are not-so-shockingly horribly offensive, while others are misguided and instigate unnecessary fear. Threats have been made on the site, and false information concerning police investigations has been leaked to create panic. There are lawsuits in place for the various accounts of cyberbullying, as well as racist and insensitive remarks. So it makes you wonder, Is this real what’s on the mind of the American collegiate? 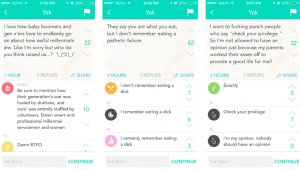 When watching the current election in progress, one candidate in particular is noted for “saying what everyone is thinking”, and some Yik Yak chats seem to support this statement. However, there can be an argument made that there is a significant difference between publicly announcing your stance on issues, and virtually spreading spreading them anonymously. It essentially comes down to: How do we conceive identity? Is your identity only comprised of who you are in the public sphere? Or is your identity truly who you are behind closed doors?

Since this app is geared towards young adults, it is interesting to see how binary classifications are formed. If you have a “progressive” stance, you’re automatically labeled a democrat and vice versa. Much of this is left up to the interpretations of the fellow “yakkers” in your area. From this there is the establishment of a perceived identity, that could in fact vary according to your region and audience.

Ultimately, your identity is your own, but anonymity does bring an interesting twist into the equation. Would people really be just as comfortable saying the things they post out loud, if they knew their name would be attached? Are these chats the true confessions of our generation, or an afterthought that they feel they need to get of their chests? Either way, do these perceived identities hold any water when trying to “uncover” the “true” identity of the individual? Is there even such thing as a “true identity, and what role is social media playing into our perception of it? 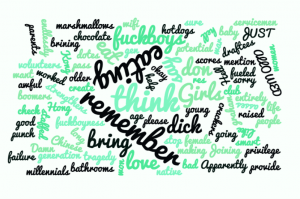